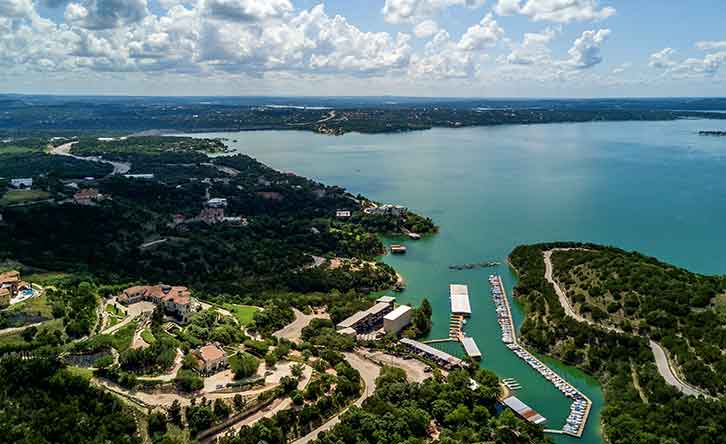 Lakeway is a little gem of a city located about 40 minutes northwest of Austin. Just like the name would imply, this scenic town is just 15 minutes from Lake Travis and snuggled against the shores of the breathtaking Colorado River.
The city feels more rural than larger suburbs like Round Rock and Cedar Park and is exceedingly charming with its rich greenery and serene river views. It’s one of those places that’s just far enough from everything to feel like a getaway, but close enough to make use of all the modern conveniences families rely on.

Though Lakeway isn’t large and only has a population of about 15,000 people, it’s growing at a steady pace. Most of the residents work outside the city and coming and going is easy with TX-71 running right alongside the southwest side of town.

Unlike other Texas cities where ranch-style homes dominate, Lakeway offers a mix of various styles from contemporary and modern to villas and custom new construction. Because it’s a slightly more expensive city to live in, condos are a popular choice, though single-family homes are still prevalent. Houses range from $315,000 to over $2.5 million, with many homes valued at more than $500,000.

Lakeway is a community that values education, and it shows through their highly-rated ISD and excellent schools.

This city is a recreational hotspot with tons of opportunities for outdoor experiences on land and water. Lakeway has three different marinas and 11 parks and natural areas. Adventuring families and singles will enjoy unique nearby sporting activities like flyboarding on the lake and riding a zipline along the shores of Lake Travis. And golfers will love being so close to one of Texas’s most beautiful golf courses at The Hills of Lakeway. If you ever get tired of the many excursions in and around Lakeway, Austin is only a short drive away!

Lakeway is home to a variety of small businesses and restaurants which are dotted throughout the city, and Lohman’s Crossing Shopping Center offers some national brands as well. If you can’t find what you’re looking for in town, you won’t have to travel far. The Hill Country Galleria is only 15-minutes away, and there’s even more shopping within a 30-minute drive including the Lakeline Mall in Cedar Park.