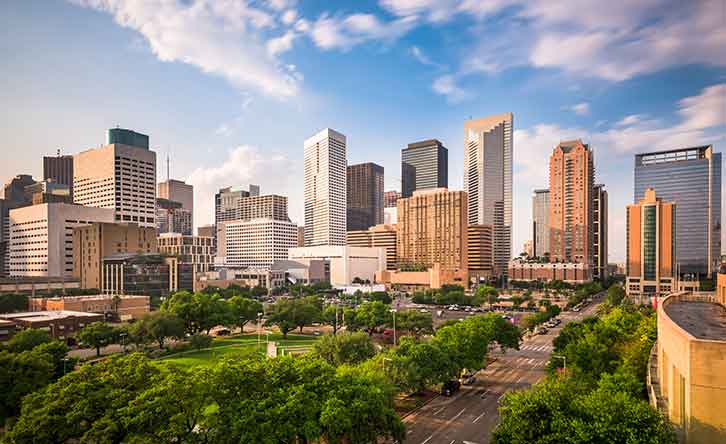 Houston is the largest city in Texas, by population, with more than 2.3 million residents. In fact, it’s the fourth-largest city in the United States and covers over 637 square miles of land making it the eighth-most expansive city in the country.

While the size of the city may be pretty impressive, there is far more to Houston than just a large population. The city attracts over seven million visitors each year to the incredible Museum District. In addition, it’s known for the incredible visual and performing arts scene with year-round performances held in the Theater District.

With a long history of providing a great place for residents to live, it comes as no surprise that Houston has been ranked in the top ten on so many lists. The city has been recognized for dining, tourist attractions, quality of life, education, and medicine. In fact, Houston Methodist Hospital has been ranked as the Best Hospital in Texas by U.S. News & World Report.

Just about any type of home you’re looking for can be found in Houston. From luxury condos in urban areas to suburban properties with large backyards, the city offers a little bit of everything. Homebuyers in Houston have their choice between affordable neighborhoods, along with more luxurious choices, such as the Museum District and the Galleria. Many newer master-planned communities are found throughout the area, as well as in nearby Katy, Conroe, Copperfield, and The Woodlands. Even condos and high-rise apartment buildings are found throughout the city with many located in historic buildings and others providing luxury amenities.

While Houston may be the largest city in Texas, education doesn’t become lost here. There are several great schools found within the city including:

​Offering hundreds of great restaurants and dozens of top shopping areas, Houston has plenty for new residents to enjoy. Along with the normal things you can do year-round, the city offers several annual events, festivals, and concerts to enjoy.

Some of the best attractions in all of Texas are found within Houston, including the 337 parks. Hermann Park may be the best choice as its home to both the Houston Museum of Natural Science and the Houston Zoo. In addition to the parks, the city offers plenty of other things to do including the Space Center Houston, the Downtown Aquarium, Sam Houston Race Park, and so much more.

Some of the finest shopping in Texas is found in Houston with options ranging from typical chain stores to luxury boutiques to locally-owned shops. The Galleria offers one of the most popular shopping options, while those seeking eclectic shops will enjoy the Historic Heights shopping area. With dozens of great shopping options throughout the city, there’s certainly something for everybody here.